As professional sports leagues and the athletes they employ garner a higher public profile, there have been increasing demands, from media, lawmakers and the public that they be held to a higher standard of conduct.  Athletes have come under greater scrutiny, both on and off the playing surface, with each instance of misbehavior sparking a greater outcry than the last.  However, is there a public good served by publicly vilifying athletes for off-the-field or off-the-court indiscretions?

Moreover, do professional sports leagues, like the NFL, have the competence or right to impose punishment on players in response to public outcry, either before the player has had his day in a court of law, or after the courts have decided not to pursue criminal charges?

Rice was arrested earlier this year for allegedly punching his then fiancee unconscious at an Atlantic City casino.  A New Jersey grand jury indicted Rice on a charge of aggravated assault, which carries a penalty of up to five years in prison.  The charge was later dropped when Rice agreed to enter court-supervised counseling, and he eventually married his fiancée, the alleged victim in the case.  Despite the decision of the courts, the media outcry continued, and NFL commissioner Roger Goodell responded by levying a two-game suspension against Rice, just days before a TMZ video of the assault was made public.

Furthermore, as the betting would suggest, the video stoked further outrage, putting Goodell in the uncomfortable position of exacting harsh punishment on a player for non-football related offenses that a court of law deemed not severe enough to bring to trial.  Goodell dropped the hammer on Rice, suspending him indefinitely, while the Ravens terminated his contract, likely ending his NFL career.

In Peterson’s case, the 2012 NFL MVP was recently suspended by the Vikings following his indictment by a Texas grand jury on charges of reckless or negligent injury to a child.  Peterson did not deny the allegations, explaining that he applied the same method of discipline on his son that had been applied to him as a boy. While it is understandable that the public is shocked by such actions, demands for the NFL to act where the courts have not place a burden on the NFL that it is simply not capable of carrying.  The NFL is a private enterprise that exists for the primary and legitimate purpose of making money.  It lacks the experience, competence, and mandate to exact justice fairly and in accordance with the law.

While fists have been shaken at the NFL’s perceived bumbling of the Rice case, a surprising modicum of outrage has been directed towards the New Jersey court that chose to drop the charges against Rice.

Adrian Peterson has received little to no benefit of doubt prior to getting his day in court.

NFL players have been arrested at a rate of approximately one per week in 2014, and we’ve witnessed no shortage of high-profile college football players who have faced charges that were conveniently made to disappear.  It’s a worrisome trend for every member of society, whether he or she is a football fan or not. However, such offenses are best addressed in court—where the accused player both answers to the law and is protected by it.  If the courts don’t punish a player for alleged offenses, the commissioner of the NFL cannot do it for them, no matter how vociferous the howls of media outrage become. 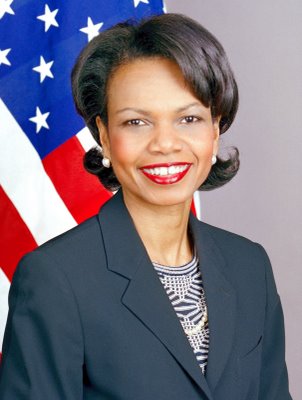 While you might have not liked Dr. Condoleezza Rice as a member of the Bush Administration, you might just like her as a replacement for the current National Football League (NFL) Commissioner, Roger Goodell. Roger Goodell is so horrible that I’m willing to give anyone an opportunity to do a better job than him. Dr. Rice certainly could not do any worse. Since Dr. Rice is a conservative, you can expect her to make decisions that will be good for the economic well-being of the NFL. Therefore, she knows that allowing the football players to actually play football sells tickets. With this in mind, I would anticipate that she would not punish and fine players for simply delivering good football hits. Roger Goodell is currently moving the NFL closer to a flag football league. Mr. Goodell, the NFL is for grown men—act like it!

Dr. Condoleezza Rice has expressed many times that her dream job is to become the NFL Commissioner http://query.nytimes.com/gst/fullpage.html?res=9B05EFDE1F3CF934A25757C0A9649C8B63.

For liberals who usually like to see government play a more active role in the people’s lives but who would like to see the NFL Commissioner play a less active role in how players play the game, you might just be pleased to see a conservative Dr. Condoleezza Rice assume this position. The more “hands-off” approach of conservatives could be just what we need to improve much of what’s wrong with how Roger Goodell is managing the NFL.

Dr. Rice is a highly accomplished woman. She’s certainly one of the smartest persons in the world that I know. As President George W. Bush’s Secretary of State and National Security Advisor, she has had to handle problems that are much more difficult and important than those that occur in the NFL. She, therefore, has the necessary preparation for solving problems and responding to great challenges to be an effective NFL Commissioner.

I know that some people’s strong dislike of this woman politically will not even allow them to consider supporting her as the NFL Commissioner. I just would like you to know that as NFL Commissioner she would not be handling serious issues pertaining to war and peace. It’s important for us to keep an open mind about many things in life. When we’re not willing to keep an open mind about phenomena in life, we could really miss out on some great things.

Think about how wonderful it would be to have an African-American woman as the NFL Commissioner. The fact she is a woman and African-American would send such a positive and much needed message about diversity throughout the NFL, sports, America, and world.

Even if you don’t like Dr. Condoleezza Rice politically, I encourage you to entertain the idea of supporting her as a possible future NFL Commissioner. The NFL is making some progress with advancing, retaining, and hiring African-Americans in leadership positions, although it’s very inadequate progress. The presence of Dr. Condoleezza Rice in this position would convey a strong message that the NFL truly welcomes African-Americans in leadership positions.

Roger Goodell, National Football League (NFL) Commissioner, reigns as a dictator in the NFL. The NFL needs a more democratic system of governance. What’s ironic about this situation is this anti-democratic system of governance is situated in America—the greatest democracy and beacon of hope and freedom in the world. He has all of the power to control virtually everything that happens. Although I really have not been too happy with him since how he handled the Michael Vick situation, he has went too far with his ruling on how players may hit one another during a game. I have noticed that it has made some players more timid players because they fear getting fined and suspended. Football is a tough game to play, one that will involve violent hits—that’s just the game it is. When you start limiting the natural violent hits that will occur in football, you start changing the outcomes of games and start moving it more towards flag football.

When a player suits up to play in the NFL, he knows that he is going to get hit hard—it just comes with the territory. It seems that Roger Goodell is at war with James Harrison of the Pittsburgh Steelers. Since James Harrison has been outspoken against him, it seems that Goodell is trying to show him that he’d better not challenge him. James Harrison has even met with Goodell to learn what is acceptable hitting in his view, but Harrison has still been fine for a hit since that meeting. I very much appreciate Troy Polamalu of the Pittsburgh Steelers for being willing to unapologetically and publicly challenge Roger Goodell.  Troy Polamalu has publicly advocated for a more democratic system of governance in the NFL.

NFL fans should also voice their opinions to Roger Goodell because he is making significant changes that can dramatically damage the game that we all have come to love for years. As Kanye West says, “There’s no way one man should have all that power.” If we allow him to continue to have all of the power he has, I think that many of our great players will begin to retire, as James Harrison seriously considered. Of course, I don’t want players to intentionally attempt to use their helmets as weapons on the field, and we know when this is the case, but this does not mean that we have to fine and/or suspend a player each time there is helmet to helmet contact.

I contend that we need to move away from allowing Goodell to have all of the power to a system where he shares power with a committee of former players and coaches, which will make the governance of the NFL more democratic. Although I think that NFL players must rise up and unite behind a demand for a more democratic system of governance in the NFL, I think that the real key to making this change happen lies with us, the fans. When the fans unite and tell Roger Goodell that we have had enough of his dictatorship, he will be forced to make serious changes to the way he operates. NFL fans and players unite!