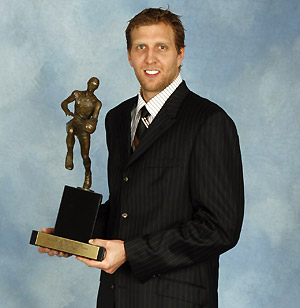 Each month, Revolutionary Paideia honors a person who embodies the “unsettling, unnerving, and unhousing” spirit that founded this site. Every person selected to be the Person of the Month has to have some significant part of him or her that is truly different in a substantive way. Throughout the 2011 National Basketball Association (NBA) Playoffs, Dirk Nowitzki has proven himself to be a player worthy of being selected as one who exemplifies the founding spirit of this site.

Dirk simply does things his own way. His unorthodox style of play often leaves people amazed at how he can perform so well when he is breaking nearly all of the traditional fundamentals of basketball taught by coaches at all levels. When shooting, Nowitzki jumps off of the wrong foot. He shoots off-balanced when he does not even have to shoot off-balanced. Dirk’s best shooting is done when he’s shooting off-balanced. When Dirk is driving to the basket, he’s off-balanced and looks like he has no idea what he’s going to once he actually gets to the basket. Unfortunately, for his opponents, he knows exactly what he’s going to do when he gets to the basket: score.

There’s no one in the NBA who can successfully defend Dirk Nowitzki—this is a reality that puts him in a class with only a small group of elites.  In the 2011 NBA Playoffs, Nowitzki has been defended well by some players, but their good defense didn’t have any impact on his ability to score. Very good NBA players in the 2011 NBA Playoffs who played against him have said that he hits shots that are simply “deflating.”

Dirk Nowitzki has performed brilliantly in the 2011 NBA Playoffs. He has led his team from seemingly impossible deficits to overcome against the Portland Trailblazers, Oklahoma City Thunder, and the two-time defending NBA champions, the Los Angeles Lakers. Dirk led his team to sweeping the Los Angeles Lakers, which is something that he should receive great praise for being able to accomplish.

Dirk has improved his toughness and defense this year, especially in the playoffs. He has often been criticized for being “soft,” even I have vociferously criticized him for being “soft.” Throughout the playoffs, Dirk has proven to be a man who can evince the necessary toughness to win. It has recently been reported that he sustained an injury to his non-shooting hand in last night’s defeat to the Miami Heat in Game 1 of the NBA Finals, so it will be interesting to see how he responds to this injury. He believes that the injury will not impact his performance.

No matter what happens in the 2011 NBA Finals, Dirk Nowitzki’s outstanding play deserves to receive some serious recognition. He is unequivocally the best international player ever to play in the NBA. Dirk has accomplished such greatness as an NBA player by simply being Dirk. He has not allowed anyone to change the way he plays and this decision has paid lucrative dividends for him.

It is my pleasure to name Dirk Nowitzki the Revolutionary Paideia May 2011 Person of the Month. Congrats, Dirk!