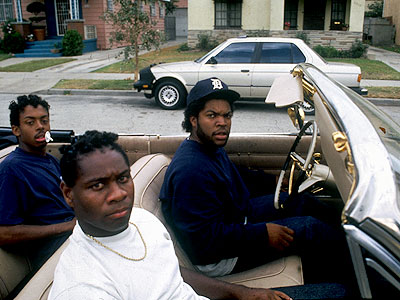 A Structural Analysis of John Singleton’s Boyz N the Hood

The scholarly literature has evinced that Black males academically underperform all groups throughout the educational pipeline (Hood, 1992; Jackson, 2003; Polite, 1994; Watson & Hodges, 1991).  Jameson (1991) explains that film can be a useful vehicle for unveiling harsh realities about the lived experiences of sundry people.  In Boyz N the Hood (1991), John Singleton offers a disquieting account of the lived experiences of Black people, particularly Black males, in a poverty-ravaged South Central Los Angeles neighborhood.  At the core of the film’s narrative is the relationship and interactions between three young Black males: Tre Styles (Cuba Gooding, Jr.), Darrin “Doughboy” Baker (Ice Cube), and Ricky Baker (Morris Chestnut).  The audience witnesses how racism, indifference, rampant violence, and the increasing disintegration of the Black family in South Central Los Angeles militate against the coming of age of these three Black males.  As a contribution to the scholarly discourse on Boyz N the Hood, this paper provides an examination of how structural dimensions of the milieu in which the film is set (South Central Los Angeles) have a damaging impact on the progression of these Black males.  The structural frame championed by Bolman and Deal (2008) serves as the dominant lens through which this film is analyzed.

One of the vexing structural elements in the film that one of the Black males has to combat is a Eurocentric school curriculum.  Tre Styles learns at an early stage in his experience in the educational pipeline that the extant structure of curriculums and schools have little cultural relevancy to Black students living in impoverished urban conditions, especially when his teachers make no effort to be inclusive in their pedagogical practices.  Tre challenges the structural authority of one his White female teacher about why there is not a presence of Black people in what she is teaching.  What he challenges is the “pervasiveness of whiteness in curricula, space, and activities” that Harper and Hurtado (2007, p. 18) speak about being present at predominately White institutions (PWIs).  This challenging of her position authority (put in place by the hierarchical structure of the school’s administration) leads her to send him constantly to the Principal.  This leads Tre’s mother, Reva Devereaux (Angela Bassett), to use her position power (as his mother) to send him to live with his father, Furious Styles (Laurence Fishburne), who lives in a tremendously unsettling and violent neighborhood in South Central Los Angeles, as punishment for not embracing hegemony and quietly conforming to the Eurocentric curriculum.  Tre moves to an environment where he has to be more concerned about survival than receiving an education, no matter how limited of an education he could have received from the Eurocentric curriculum.  He is not able to find a sense of belonging in the school because this organization exists “to achieve established goals and objectives” (Bolman & Deal, 2008, p. 47) not inclusive of culturally relevant subject matter and pedagogy.

Moreover, one of the most damaging structural elements in the film is the Black family itself.  The film exposes an increasing dissolution of the Black family in South Central Los Angeles.  The most troubling way in which the film illuminates this is in how Brenda Baker (Tyra Ferrell) feels it necessary to favor her younger son (Ricky Baker) over her older son (Darrin “Doughboy” Baker), because the economic structure (capitalism) dominating her family’s situation compels her to favor him (from her perspective).  For Brenda, Ricky, who is a star student-athlete with great potential to not only become a superstar college student-athlete, but also professional athlete, is her family’s only hope of moving into a more favorable position within the capitalist economic system.  The audience witnesses how the lack of meaningful economic and social opportunities for Black families in South Central Los Angeles conjoined with an absent father forces Brenda to not only commodify her children, but also to reify them: Darrin becomes her “waste” and Ricky becomes her financial investment.  Unfortunately, at the conclusion of the film, both Darrin and Ricky die—symbolizing how important the unity of the family is and how harmful the dissolution of the family is.

The larger significance of this film is it demonstrates how the current economic structure, capitalism, in America (and in the global milieu) is harmful to most people, especially for Black people living in impoverished conditions.  Jameson (1991) highlights how capitalism’s structure dominates all other dimensions of life, including the human resource, cultural, and (most importantly) political dimensions of the lived experience.  The significance of this film for Antonio Daniels is it offers vivid insights into why there is a need for an alternative global economic system, and it affirms that the structural is constructed from the political; that is, the political determines the structural.  When we are analyzing the structural, therefore, we have to consider the conspicuous and subtle political that comes to compose what we see as the structural.  The larger significance of this essay to organizational theory and behavior studies is it highlights that it is important to have a dominant framework that concatenates the four frames Bolman and Deal (2008) champion into a totality, a cognitively mapped narrative revealing how each of the frames are interconnected.

Jackson, J.F.L. (2003). Toward administrative diversity: An analysis of the African-American male educational pipeline. The Journal of Men’s Studies, 12, 43-60.