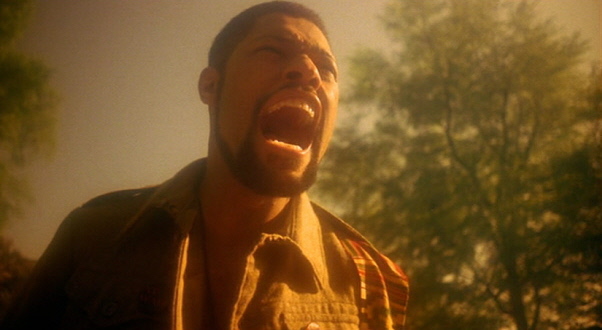 School Daze (1988) is a musical-drama film composed and directed by Spike Lee (who as stars in the film as “Half-Pint”). The film centers on Vaughn “Dap” Dunlap’s (Laurence Fishburne) efforts to have the students and administration at Mission College, a fictitious prominent historically Black college, participate in a movement opposing apartheid in South Africa. One of the central goals of the movement is for the students and administration to champion institutional divestment from South Africa. Although Dap is successful in getting the attention of many students and the administration, and many students support his anti-apartheid positions, most Mission College students are unwilling to incur any institutional repercussions for fully partaking in Dap’s anti-apartheid movement.

The failure of the students to engage in political activism to protest apartheid in South Africa exposes how capitalist ideology has imbued their psyches. Most of the students are not willing to risk the potential of being expelled from school to become a part of a passionate movement for freedom in South Africa.  They fear losing immediate and future money as a result of being expelled from a prestigious institution.  While there seems to be general respect for Dap’s intellect, there appears to be a dominant view among the students that his intellect is practically dangerous. Even though the things Dap says sound good to them, they know the political activism he advocates requires them to act in ways that will cause them to risk the “safe” spaces they occupy.

While those who watch and review School Daze may fall victim to the easy temptation to read Dap’s political consciousness as being unfruitful, he causes the students and administration to have to wrestle with the tensions that exist between their money, morality, intellect, and politics. Unfortunately, they primarily reduce Dap to being an out-of-touch “revolutionary.” His ideas ultimately just become interesting and not things that should not be pursued. The majority of the students are concerned fundamentally with themselves instead of the collective as Dap is.

The strong hostility of Mission College’s administration to Dap’s zealous insistence on the institution’s divestment from South Africa unveils the inauthenticity of the school’s motto: “Uplift the Race.” Dap does not succumb to the threats of Mission College’s administration to expel him; he employs different tactics to work around potential expulsion attempts.

At the end of the film, Dap vociferously and repeatedly states, “Wake Up!” All students come out their dorm rooms, as Dap stands in front of them. The film leaves what is happening and what will happen for the viewer to interpret. One could interpret the ending as the students are finally ready to actively participate in the anti-apartheid movement, and they begin to see how their personal concerns, including being overly consumed by fraternity and sorority life, are less significant than the national and global issues and problems that can have an affect on them and what they will be able to accomplish when they graduate. From the students’ body language and facial expressions, it does not seem like they are simply patronizing Dap but are seriously ready to follow his leadership. Dap’s refusal to accept the status quo is what allows the solidarity meeting take place at the end.

What the film suggests is Dap longs for people at Mission College and beyond to “wake up” from sleepwalking while there are numerous important problems they need to be working to address, including, of course, fighting apartheid in South Africa.