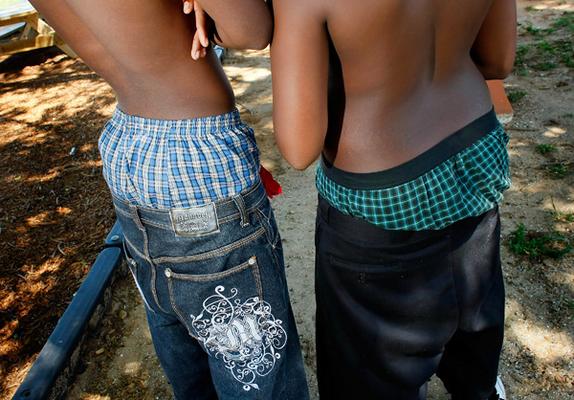 An increasing number of public and private discourses are taking place across the nation about sagging pants.  One wears sagging pants when his or her underwear or other undergarments are showing.  It’s understandable if one does not like to see the undergarments of another person who has sagging pants.  Although I see a person’s choice to sag his pants as being safeguarded by the First Amendment, I do understand those who support school rules and ordinances prohibiting sagging.  Personally, I don’t sag and don’t think it’s an attractive fashion phenomenon.   However, what’s not understandable is making deleterious assumptions about people just because they’ve elected to wear sagging pants.  Unfortunately, Black males who wear sagging pants are disproportionately affected by unmerited assumptions about their sagging pants.

I need to send many White people a message that just because a group of Black males who have sagging pants are walking down the same sidewalk as you are does not mean that they’re automatically a threat to you.  In reality, Black males have more reason to be fearful of you than you of them.  If you need some evidence of this, use Google to search for Bo Morrison and you will have just one piece of numerous pieces of evidence to support why I made the aforementioned statement.

For those White people who believe that all, most, or many Black males who have sagging pants are criminals and dangerous, do you feel the same way about White males with sagging pants?  I’m just curious.

For those who would try to suggest that Black males and others who sag their pants are trying to be like prisoners, you’re engaging in fallacious thought.  What you’re really trying to do is construct some “evidence” to justify your prejudice and racism.  Therefore, just be real and say so.

Instead of placing so much investment in what Black males are wearing and how they wear their clothing, how about devoting the same level of investment in ensuring they receive a high quality education and have a greater chance to experience success.

I argue that many people who don’t like Black males anyway are attempting to take our focus off of critical problems facing Black males.  They want to thwart any chance that Black male academic underachievement will become a national issue we earnestly work together as a country to remedy.  Let’s not allow them to bamboozle us! Let’s stay focused on real issues and problems Black males face—not sagging pants!